Today I picked up my framed beaded work from the Art Supply store. St. Natalia is completely finished. This is my gift to my daughter Nataly. 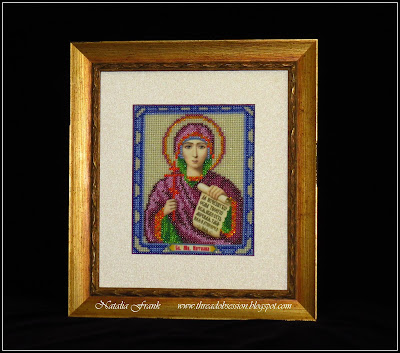 The Martyrs Adrian and Natalia were married in their youth for one year prior to their martyrdom, and lived in Nicomedia during the time of the emperor Maximian (305-311). The emperor promised a reward to whomever would inform on Christians to bring them to trial. Then the denunciations began, and twenty-three Christians were captured in a cave near Nicomedia.

They were tortured, urged to worship idols, and then brought before the Praetor, in order to record their names and responses. Adrian, the head of the praetorium, watched as these people suffered with such courage for their faith. Seeing how firmly and fearlessly they confessed Christ, asked: “What rewards do you expect from your God for your suffering?” The martyrs replied: “Such rewards as we are not able to describe, nor can your mind comprehend.” St Adrian told the scribes, “Write my name down also, for I am a Christian and I die gladly for Christ God.”

The scribes reported this to the emperor, who summoned St Adrian and asked: “Really, have you gone mad, that you want to die? Come, cross out your name from the lists and offer sacrifice to the gods, asking their forgiveness.”

St Adrian answered: “I have not lost my mind, but rather have I found it.” Maximian then ordered Adrian to be thrown into prison. His wife, St Natalia, knowing that her husband was to suffer for Christ, rejoiced, since she herself was secretly a Christian.

She hastened to the prison and encouraged her husband saying: “You are blessed, my lord, because you have believed in Christ. You have obtained a great treasure. Do not regret anything earthly, neither beauty, nor youth (Adrian was then 28 years of age), nor riches. Everything worldly is dust and ashes. Only faith and good deeds are pleasing to God.”

On the pledge of the other martyrs, they released St Adrian from prison to tell his wife about the day of his execution. At first St Natalia thought that he had renounced Christ and thus had been set free, and she did not want to let him into the house. The saint persuaded his wife that he had not fled from martyrdom, but rather had come to give her the news of the day of his execution. 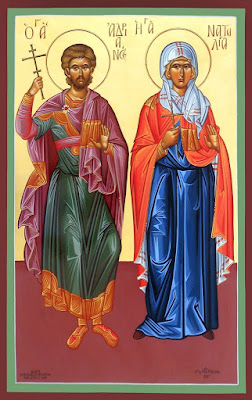 They tortured St Adrian cruelly. The emperor advised the saint to have pity on himself and call on the gods, but the martyr answered: “Let your gods say what blessings they promise me, and then I shall worship them, but if they cannot do this, then why should I worship them?” St Natalia did not cease to encourage her husband. She asked him also to pray to God for her, that they would not force her into marriage with a pagan after his death.

The executioner ordered the hands and the legs of the saints to be broken on the anvil. St Natalia, fearing that her husband would hesitate on seeing the sufferings of the other martyrs, asked the executioner to begin with him, and permit her to put his hands and legs on the anvil herself.

They wanted to burn the bodies of the saints, but a storm arose and the fire went out. Many of the executioners even were struck by lightning. St Natalia took the hand of her husband and kept it at home. Soon an army commander asked the emperor’s approval to wed St Natalia, who was both young and rich. But she hid herself away in Byzantium. St Adrian appeared to her in a dream and said that she would soon be at rest in the Lord. The martyr, worn out by her former sufferings, in fact soon fell asleep in the Lord. 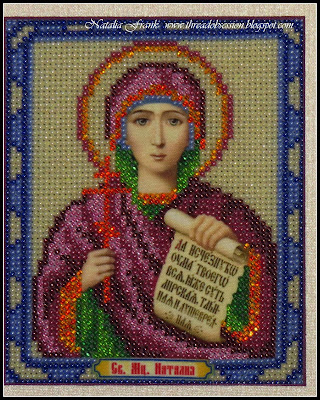 Email ThisBlogThis!Share to TwitterShare to FacebookShare to Pinterest
Labels: Beading

Natalia's Fine Needlework
I know, I am in my own little world, but they know me here... scarletsails@live.com www.dollhouseneedlepoint.com 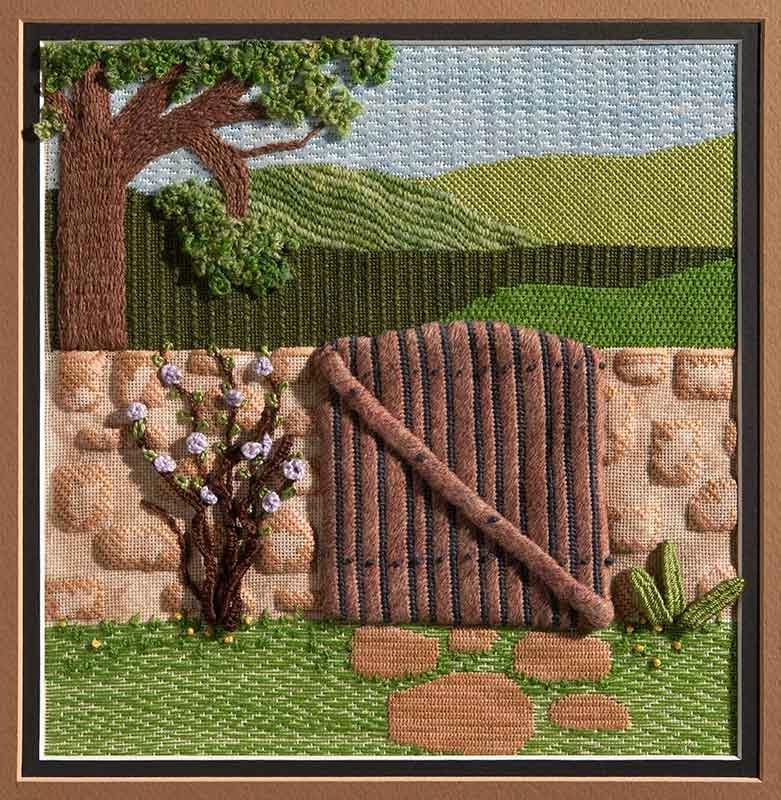